💖 Liked: The “P” in Progressive Enhancement stands for “Pragmatism”

“I often think of IE11 as a rancid smog that follows us around, spoiling things. This is not me criticising the browser, though. Instead, I’m referencing how it follows progress on the web around, hindering it.
I’m also seemingly putting the blame on the browser for that, too, but no: that blame …”

According to the scales, I lost 5kg over the last week. Four more weeks of that (unlikely, but 🤞) and I’ll hit my weight goal.

💬 Replied to: New bar where you pay by the hour to drink

“Open Concept is a new bar in St. Louis, Missouri where patrons make an appointment to visit and then pay by the hour to drink as much (or as little) as you’d like. The per-hour price is $10 b…”

There’s a café near me that uses the same business model, and they seem to be doing well enough, so for a bar, it could work. My concern would be that it encourages patrons to speedily binge drink – cram as much booze down their throats in as little time as possible, to only pay a smaller amount.

While I was waiting to get my vaccine, there was a constant stream of people checking out the shelf of products marked “[will] help you sleep better.” I thought that was interesting in the context of my two posts from this morning.

Just had my annual flu vaccine. Even if my work wasn’t paying for it, I’d probably get it anyway, as vaccines are good.

I just had to walk out of the office because the three different conversations happening around me became overwhelming. This is your periodic reminder that open plan offices suck.

On the subject of lack of sleep.

I had a bad night’s sleep, and have been awake since the early hours of the morning, so I’m already starting to flag. Today is probably going to be very long.

“For when you need a more poetic way of telling some arsehole to fuck off.”

“Motherfoclóir is a delightful podcast about language and linguistics as they relate to Ireland (“foclóir” being the Irish word for “dictionary,” and thus completely unrelate…”

💖 Liked: How I won 4 Twitter contests a day (every day for 9 months straight) by Hunter Scott

This is the story of how I wrote a Twitter bot to automatically enter contests and ended up winning on average 4 contests per day, every day, for about 9 months straight.
If you’ve ever used Twitter, you’ve probably seen a tw…”

There are a lot of managerial visitors to our office today —or as I put it to my PM: “there are more organ-grinders than monkeys.”

💖 Liked: The biggest lie tech people tell themselves — and the rest of us

“The push is the latest salvo in a global fight over who gets to set the rules for the internet.”

I snuck a taste of the cheesecake bites I made yesterday, and I’m going to have to make some more because they’re pretty much perfect.

“Google’s Chrome is not a browser, it’s advertisement delivery software. Adtech after all is where their profit is. This is incompatible with Doc Searls‘ Castle doctrine of browsers, so Chrome isn’t fit for purpose.
Removing Chrome
image by Matthew Oliphant, license CC BY ND Read Chrome to li…”

“Dark mode” for this site has been one of those things on my todo list for a while. The in-development theme I’m working on has been built from the ground up to support it through the use of media queries and CSS custom properties — but I hadn’t actually implemented it. After a nudge from reading this post by Jeremy I’ve finally implemented something to try out: 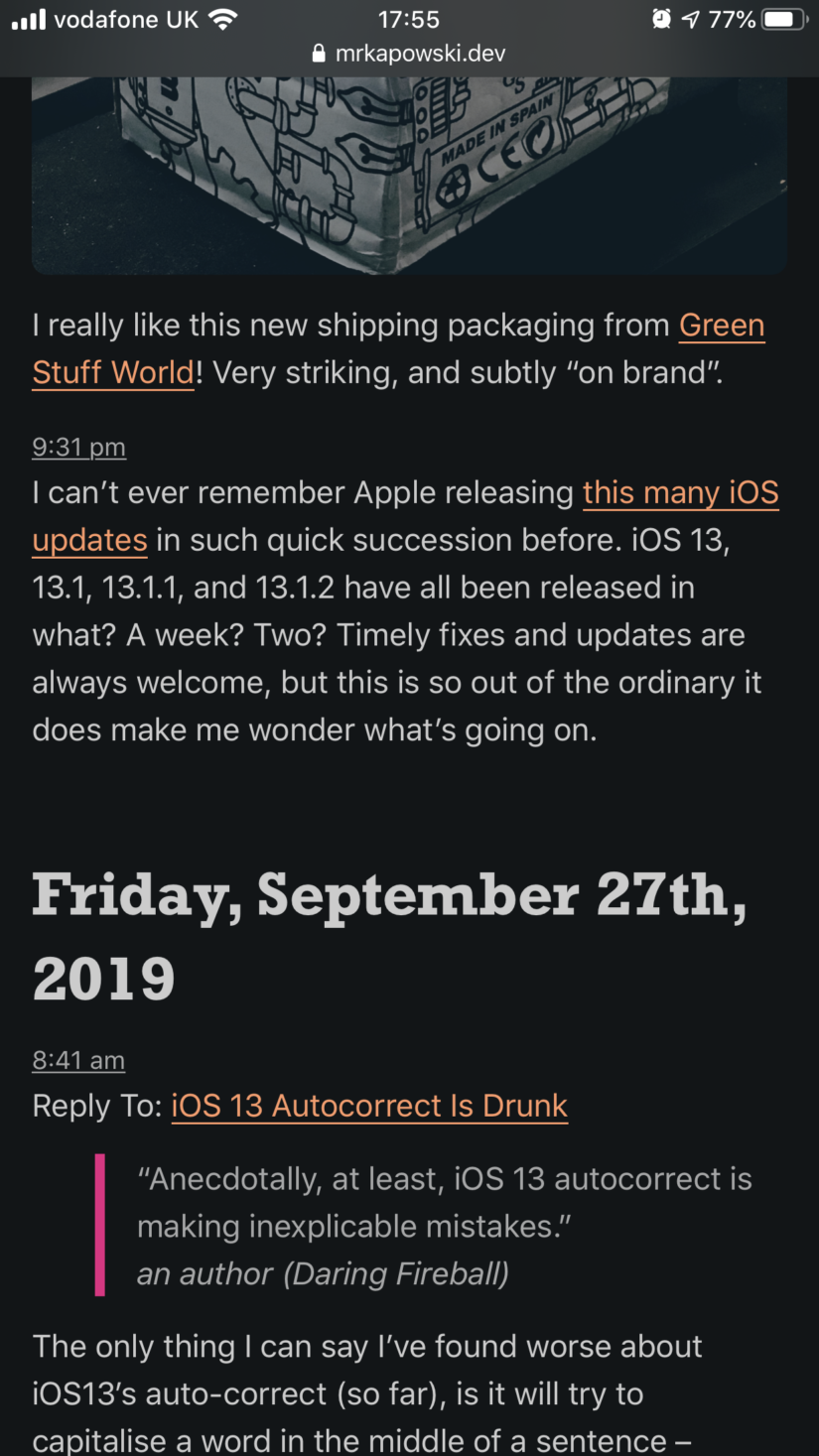 For now I’m borrowing Jeremy’s colours, but I’m planning to tweak these as the design evolves.

I have an installation of Chrome which is used exclusively for browser testing, auditing with Lighthouse – although https://web.dev does a lot of the same things now, from any browser – or the very rare occaision I need to use Google search for something (I’ll load any relevant results in FF). I’ve not signed in to Chrome either, so it *should* all be decoupled from my other web activity.

My local grocery store has started to sell its own-brand plant-based burgers. I really want to try them, but I’ll have to wait until I’m on an “off keto” cycle, as they’re relatively high in carbs. It’s amazing and encouraging how quickly the newer plant-based “meat alternatives” are becoming mainstream.

“It’s even worse than it appears.”

After work I’m going to try my hand at making some mini keto cheesecake bites. I ❤️ cheesecake.

Some of the trees across from my office window look like they’re being blown horizontal by the wind, which is going to make the walking part of my trip to the dentist fun.

YouTube’s iOS app keeps showing me this same advert for a repugnant right-wing “political” group every time I open the app, despite me taking all of the possible steps to ask for it not to be shown:

I’m really at a loss as to what else I can do to stop having this shoved down my throat whenever I use the app. Thankfully ads don’t get shown in the tvOS app timeline, yet, so it’s limited to my phone – but I’m sure I read somewhere recently they’re already testing some changes around showing ad units in the TV app.

This advert is pretty mild, even if it is scaremongering and misleading, but the next one YouTube decides I must see might not be.