Batch painted the gold on my Sororitas during Paint Night. I think I need to redefine some recesses, but that should be it all mostly done. I’ll move on to the silver next, then the red and white robes. #PaintingWarhammer #ArmiesOnParade

For the last 24-18 months or so I’ve had a background project to recreate my original Adepta Sororitas (nee: “Sisters of Battle“) army, in advance of the new codex and plastic release. With that release looking more and more imminent, I really need to get my skates on! By my reckoning I’ve got roughly three months to finish up, maybe less! 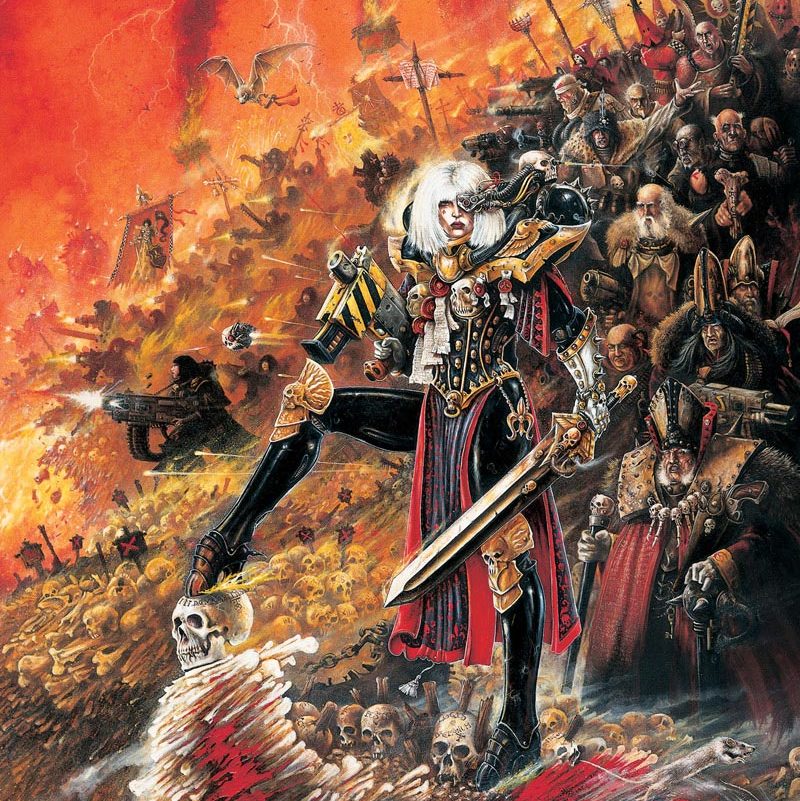 The original army was purchased by fourteen year-old me on release day in 1997. I’d saved up my paper round money for several weeks to afford it, after falling in love with what had been previewed in White Dwarf the month before. It’s a tiny army by modern standards (roughly 545 points in a Patrol Detachment), but it was a decent sized force in Second Edition, and I loved playing it. Anyway, to cut a long story short, the army was given away by my mum a few years later, once I’d moved out for university and had fallen out of the hobby. Since coming back to the fold, it’s been the one army I’ve really regretted not having any more.

I’ve already collected and painted the two Sororitas character models from the original army – a Canoness and Standard Bearer (now called an Imagifier), and I’ve started painting the two squads I’ve acquired so far: a ten-woman Battle Sister squad, and five Seraphim. I also need to paint a banner for the Standard Bearer, to truly finish it off. Long-time readers will know I have finished painting some Battle Sister squads this year, but those were bought to bulk the collection up to a “full size” Eighth Edition army, and aren’t part of the core project. 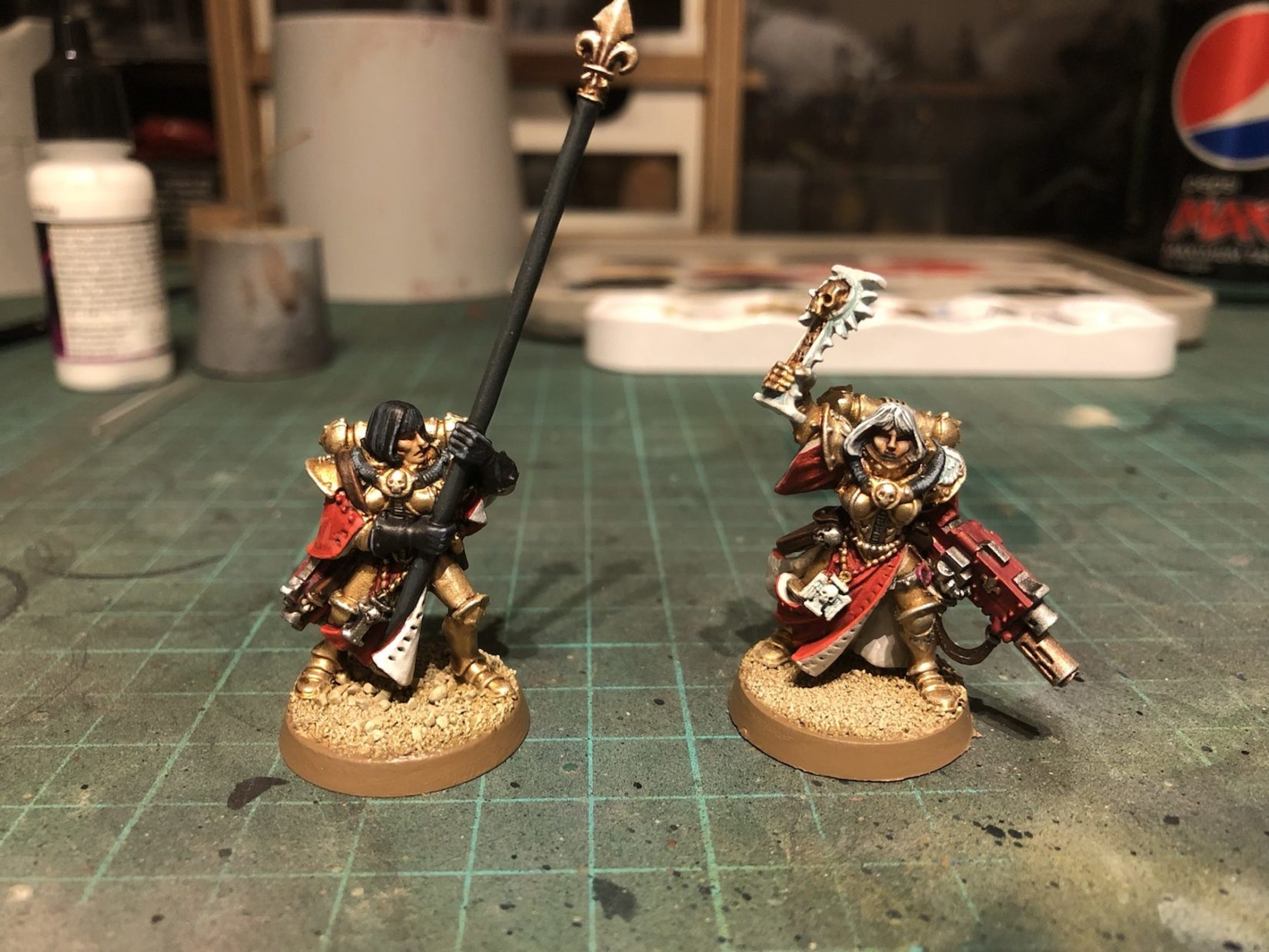 There’s still a five-strong Retributor squad to get hold of, but the problem I have here is I can’t for the life of me remember exactly what I armed them with twenty-two years ago! I’m pretty sure it was four of one weapon type – either Multi-Meltas or Heavy Flamers – but given the time period it could well have been a mix of all three. I think I’m going to go with four Heavy Flamers, as I remember I painted at least one of these “back in the day,” and I’m certain it wasn’t for the Battle Sister squad (which had a Heavy Bolter). Plus, I’ve never really liked the “Sabbat” helmet shown on some of the Sisters models, which is why I’m reasonably sure it wasn’t the Multi-Meltas.

When I started the project I knew that some of the models were going to be really hard to get hold of in a usable condition, and for a reasonable price. While many are still available from Games Workshop, several are long out of print: namely the Canoness, Standard Bearer, Immolator, and an “Imperial Missionary with Plasma Gun”. Of these, I thought the Immolator was going to be the hardest to acquire, but I found one on Saturday. Now I just need to get the Missionary. They occasionally pop-up on eBay, but usually in a bad condition, and for a higher price than I’m willing to pay for that condition. It wouldn’t be the end of the world if I can’t get hold of one at this time – it’s no longer a game-legal choice, and I’m concentrating on the Sororitas – but it would be nice for completion’s sake! 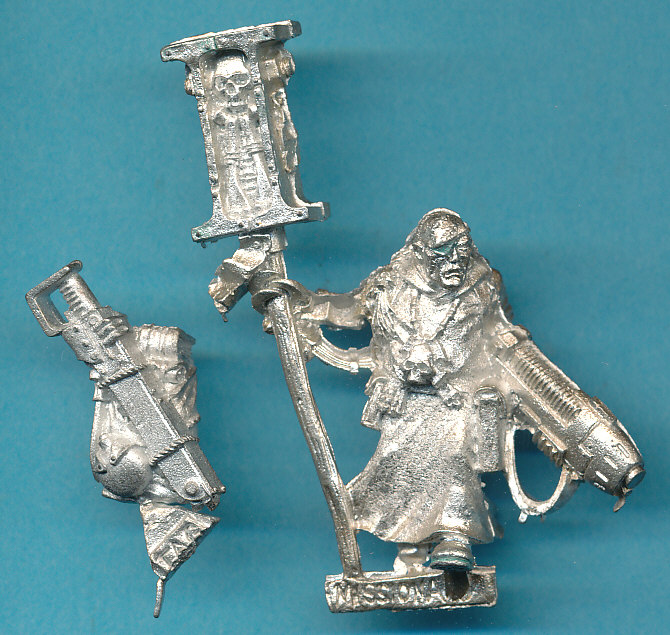 Got one of these to sell? Let me know!

So, roughly 21/22 models to paint in the next couple of months, with a currently unknown target date for completion? Sounds doable, right? Well, yeah, if you’re not as slow a painter as me, and hadn’t started a Genestealer Cults army in the meantime which needs cleared from the painting desk… If the codex is due in October, I’m reasonably confident I can make it; coming sooner and I’m less so. If anyone in the Warhammer Community team who might happen to read this wants to give me a subtle hint, that would be helpful! 😉 (Also, I’d love to write about the project as an article on the community site, once I have some more finished models to show off!)

With all that said, whether the new models are coming in 3 months, or 3 weeks, first I need to stock up on more Retributer Armour spray paint!

I have been out of the hobby for a long time. This was made clear to me when I realised the majority of the regular players at the local Games Workshop store weren’t even born (or were still in nappies) when I last rolled the dice in anger.

When I last played properly, Warhammer 40,000: 2nd edition was still the dominant ruleset (3rd had just come out when I put down my heavy flamer template). Dark Eldar were brand new. Necrons only had about 3 models in the entire line. Space Marines consisted of: Ultramarines, Blood/Dark Angels, Space Wolves, and miscellaneous. Sisters of Battle had their own codex, and it was good. Templates were bigger. Wargear came as cards. We needed dice with more than 6 sides. The world – and the game – was a very different place.

Change is inevitable, particularly if anything is to survive as long as Warhammer 40000 has. 25 years is a long stretch for what is realistically a niche game/hobby. Off the top of my head, here are just a few things which are entirely new to Warhammer 40,000, from my perspective:

Other notable changes include most special rules (sniper, feel no pain, eternal warrior, and so on), completely revamped movement rules, cover working completely differently, close combat (sorry, “assault”) changes… I could go on all day, to be honest!

Some of this change is good. Assault is generally a lot quicker and more streamlined when compared to 2nd edition. No more (as an example) Space Marine assault squads with 10 different weapon combinations, due to itemisation streamlining. Less rediculous weapon effects – prime example being armour penetration against vehicles (D20 + D4 + D6 + 10 for a chainfist… don’t even get me started on lightning claws!). Many parts of the game are more sensible than those of old. The FOC is a brilliant addition to the game in my view.

Other changes I am on the fence about… generally because it seems at times I’m rolling dice for the sake of rolling dice. Random charge/run lengths are the first thing which comes to mind. The various  terrain tests are another. Random missions, random deployment types, randon warlord traits, random psykic powers, random special rules and effects, objectives… on average I find it can take around 20 minutes of faffing about rolling on various tables and setting up stuff (other than my army) before I actually get to play the game. While on the one hand it leads to more varied games, on the other it takes an unnecessary length of time in my view.

One thing I have an impression of – and correct me if I’m wrong – is that overall, points costs are lower than before. This might be why games seem to be a lot bigger than I remember. Time was you’d have ~2 squads, a character, and a cheapish vehicle in an average game (1000-1500 points or so). Now I’m seeing games with scores of infantry, a couple of characters, multiple vehicles and creatures, all at around the same points level as before. The jury is still out on whether I see this as a positive change.

Nightfighting I hate with the heat of a thousand burning suns! But that’s just because I’ve never really wrapped my head around it in a way that doesn’t have me reaching for the rule book every 5 minutes.

Originally this post was a lot longer, and took a look at the cultural changes I’ve seen within the hobby since my return, but I decided it would be best to split this off into its own post, which you can read here: On Returning to Warhammer 40000: The Culture.