I’ve been thinking about what I’m going to work on, now I’ve got past Armies on Parade. The last few weeks have been a hobby holiday so I could recharge and avoid burnout, but I’m getting to a point where I can feel a pull towards my workspace again. I’ve had a few ideas kicking around my head, along with several projects I could revisit. In the “revisit” category, I’ve got:

None of these are particularly grabbing me right now. The most likely to get worked on are actually the Dark Angels, as my local GW store is looking for 1000 points of Dark Angels to display in their cabinets. By painting up three Ravenwing units I already have, I could get to that target pretty easily. But I just finished painting a bunch of black-armoured Space Marines, so I can feel my brain resisting.

Over on the new ideas side, there are:

At the moment, I’m leaning very heavily to Knights. I have accumulated three kits over the years, but have never got around to doing anything with them. The thought of having a “grab and go” army of just three-five models definitely appeals to me, and painting such large models would be a great change of pace. I’m in two minds whether I’d want to go with the fairly realistic, heavily weathered style I often apply to large vehicles – or to go with something simpler and cleaner. I’d also like to do some minor conversions and reposing, but I don’t know if that’s just setting myself up for a lot more work than I’m looking for.

Both of the Stormcasts and Nighthaunt ideas are really just painting the lovely models from the Soul Wars box. I’ve had an idea for applying more of a heraldic look to the Stormcasts, but I haven’t nailed down all of the details yet. I might save them for Armies on Parade 2019.

Competition entries is as it sounds. I have at least two competitions pencilled in for the next nine months, and it might be a good idea to make a start on these. I have one firm idea for the second contest, that will take quite a lot of effort, and a couple of secondary ideas where I know what I want to paint, just not how. I might start chipping away at my most developed idea, and leave the others for now. There’s also a themed monthly competition that happens in my area, so sometimes I’ll want to take part at those.

So as you can see, I’ve got a lot of choice! In fact, it’s too much choice, really, and choice paralysis has been kicking in something fierce. At this point I’m 80% sure I’ll start on some the Knights, as those seem like win-win: clearing something from my backlog, and being a viable army with only a few models needed.

But as any GW hobbyist knows, there’s always something new and shiny on the horizon to distract us…!

I don’t know what this is, beyond a “Spindle Drone” from the upcoming Warhammer Quest: Blackstone Fortress game, but it sure has got me interested and excited to find out more! In 25 years, I can’t recall ever before seeing or reading about anything like it in the Warhammer 40,000 lore. 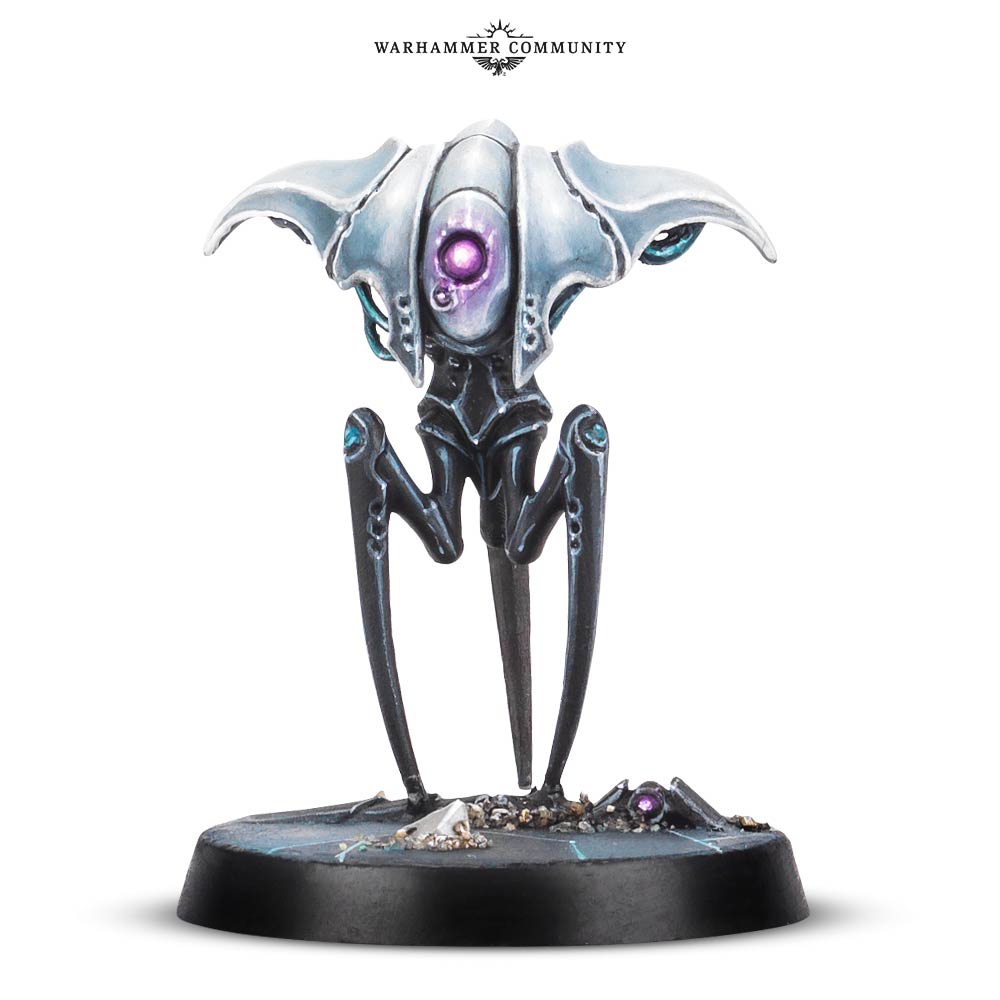 Given the setting of the game, and some of the teases, it seems likely it’s tied to either the Eldar/Old Ones or the Necrontyr/C’Tan. But the legs and the curves of the armour remind me more of the Tyranids than anything else, despite it appearing to be (entirely?) mechanical.

Blackstone Fortress should be out by the end of November, so it shouldn’t be too long before we get some answers.